...long time has passed since our last update, but we have some good news.

The school cones from Germany are on their way to Japan and will arrive in October. DHL Supply Chain confirmed that they will deliver the filled school cones to Tohoku for free. We received more postcards and pictures from many countries including African countries as well a nice pack of postcards from Ireland.

AND, we have a new partner: Let's Party Tokyo

"Since 2000, Let's Party Tokyo has been providing excellent party entertainment for the international community in Tokyo and Yokohama. With over 10 years of experience Let's Party Tokyo performers have performed at hundreds of parties and events bringing smiles, laughter and lasting memories to children of all ages.


What we like about them is that they were already very active in Tohoku and that they have the same objective: put a smile on children faces and create with this some fun moments not only for the kids, but the entire community. 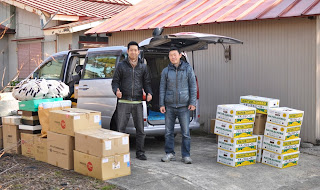 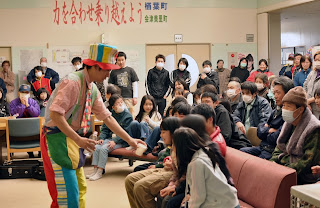 On their Blog or Facebook Page, you can find more reports and information about their activities and engagement in community work in Tohoku as well.


One week ago, we met Sam Matsuoka san (who is one of the co-owner of this company) and we explained to him that we like to deliver the school cones to three to four schools in Tohoku in beginning of December, but it would be nice to have some program around it. He liked the idea and suggested either small clown activities with magic or a small Christmas Party with Santa Claus. Both sounded very nice and now we feel honored to work together with them.


He also recommended a friend who might take small video spots which we can send around the world then, to all participating schools globally. We felt really happy after the discussion with him, who is truly an inspiring person, and now we are looking forward to the delivery date - maybe on the 5th or the 6th of December.

Thank you, Matsuoka san and "Let's Party Tokyo" in advance for all your help and making this project even more meaningful and hopefully even more enjoyable for the kids.
Posted by School Cones for Japan at 12:36 PM